Mita International is a School of Miracles. One that has never been seen before

Created on October 19, 2018
On Saturday 29th September, Mita International Gakuen Junior and Senior High School (Mita International hereafter), held their Open Day. They are the only Apple Distinguished School (400 schools worldwide) in the Kanto region and they have published practical ICT classes for teachers to use across the country.
The classes use iTunesU, a system that integrates virtual and real learning spaces. This enables all teachers and all students to develop their creative thinking skills in any subject during the classes. These lessons that use devices that enhance originality and creativity are now in full operation.
Teachers traveled from across the country to participate in this event and they were all amazed. Until now, they had never seen a school use iPads and MacBooks to create tables, graphs, and essays, to contribute during class discussions.
By using programming, we can make Sphero move like the droids in Star Wars. It was as though a purple flash was being emitted whilst moving, and as if magic was being used.
At the subcommittee meeting, discussions were held about what can be done to enhance learning. This growth mindset has attracted a lot of attention to Mita International because there is an overlap between our mindset and our students’ mindset.
by Hayato Honma, Private School Expert Researcher 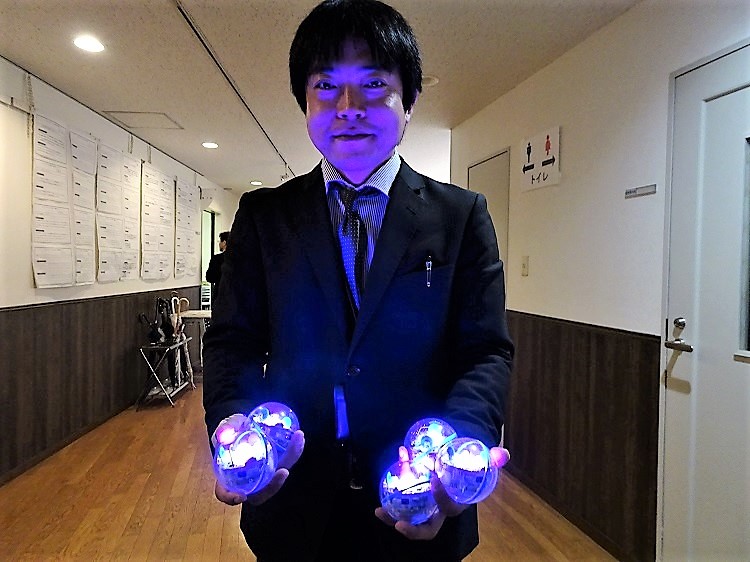 In general, the lessons consist of inputting and editing the information to recreate X as knowledge. However, at Mita International School, the lessons are about producing creativity. When you input X, a new concept, known as Y, is created. The important part isn’t about x→ x or x→ y, rather it is about the process ( → ) of discovery and creating it yourself. 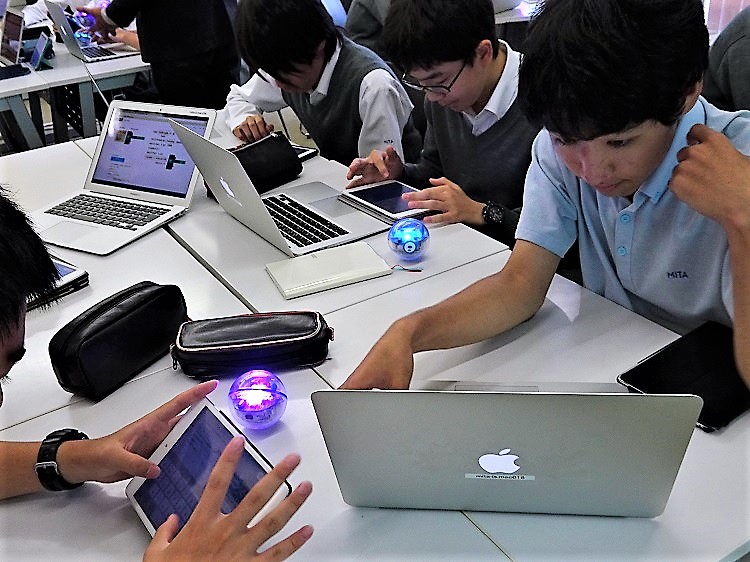 For example, even though you can use programming to manipulate Sphero’s rotational movements, there is more to the operation than just remembering the technical problems. For this reason, a creative mindset is necessary to learn programming and to be able to use it effectively.

In other words, having the thinking ability to create the function, y=f(x), yourself, is more important than only being able to explain what the function does.

By researching information about things of interest to you and then inputting that information into the function, you are able to clearly express your own thoughts because it is from your own perspective. There is a trick to the process for when you don’t know what is happening to the relationship of the function and you don’t know what the right thing to do is. In general, it isn’t possible to resolve an issue yourself in a creative way if you are only using the tools that other people have given to you.

When the Renaissance introduced modern science, the Alchemist (錬金術師) created equations by clarifying them to each other. They devised an equation to see the relationship of the function. The aim of this was to see how to make human civilization and culture by using information that flows naturally.

Newton was respected as one of the Fathers of modern science, but an Alchemist had a stronger image at that time. That said, Mita International isn’t exactly Mr. Yoichi Ochiai, but it wouldn’t be an exaggeration to say that it is now a school that makes miracles happen. 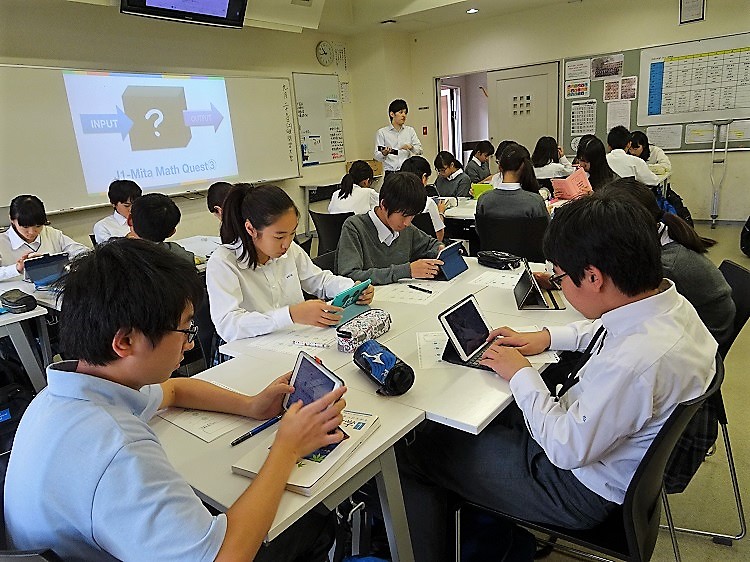 What is the association? The discussion is about the kind of tricks used to create this association. The class followed the process of; input → black box → output. The teachers seemed to have made the apps themselves and after a while, they were able to use the iPad to steadily input any numbers to process a new number. The next part of the discussion was about the black box in the equation.
The lesson was about numbers and although the process of association and the process of calculation are different as objectives or as subjects, the lesson was about how mathematical thinking ability = algorithm = producing the relationship function. There is no substitute for having a logical thought process.
Programming, association processes, and equations are all different aspects of producing creative knowledge. The subjects are different and even the objects and materials may be different too. The function y=f(x) isn’t just knowledge production, it is creative knowledge production. To be able to do this, it is necessary to have the ability to find the relationship of the function and to have the ability to create a new concept. 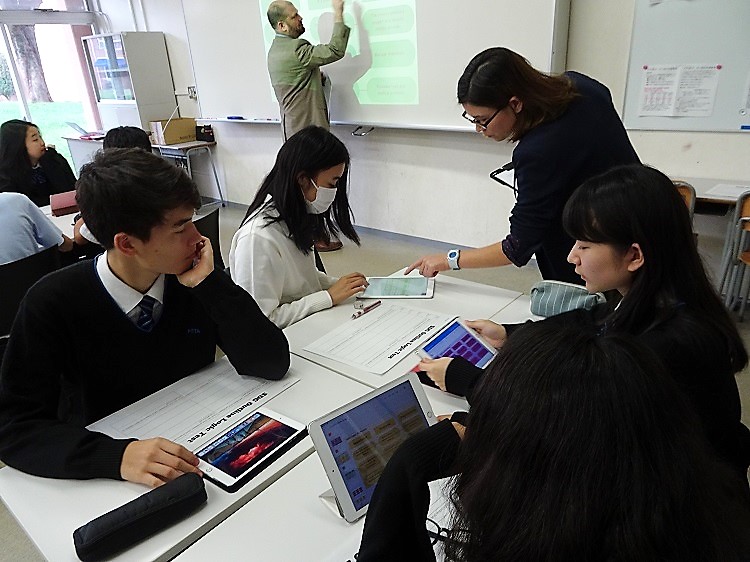 In the international class, we think about the Sustainable Development Goals (SDGs) by taking part in English discussions about the action that can be taken to improve various issues across the world. The ideal input of the function would be the information about global issues. The ideal output would be, what it means to truly be happy, which is the ultimate goal of life. Even if we could do this, it is important to know how to make the equation because there is a trick to implement to achieve the ultimate goal of happiness.

The idea is that everything has a functional relationship. Bertrand Russell and Ernst Cassirer are just two examples of the many mathematicians and philosophers that have tried to solve these problems. But the 知恵の輪(ちえのわ), which is known as the wisdom ring in English, still hasn’t been solved. The wisdom ring is a disentanglement puzzle that has one set that connects and disconnects from other pieces. Removing the pieces and creating new patterns is a complex procedure that it is best achieved by trial and error.
Nothing is impossible for a modern school like Mita International. They are making miracles happen. 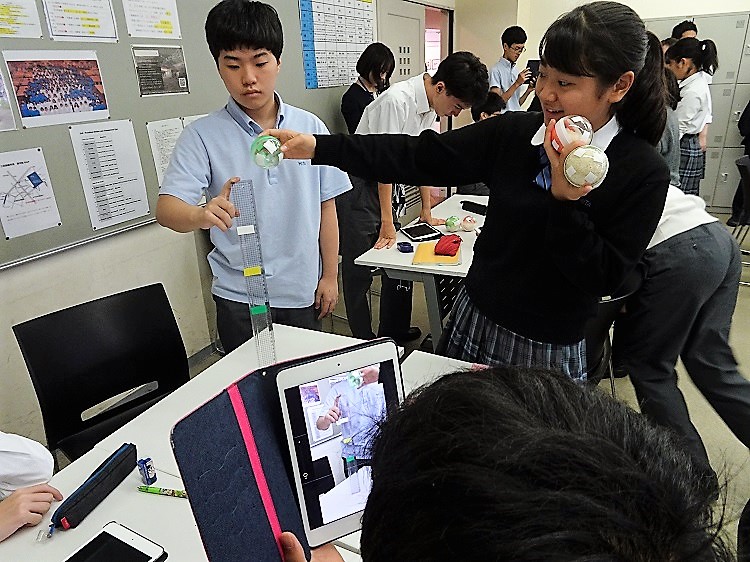 In the science lessons, they were experimenting to verify whether they could answer the trigger question, which was, what can be done to stop a bouncy object from bouncing. They continued with the experiment by using the same cylinder and just changing the conditions by filling the cylinder to the top. They created a video for monitoring purposes to record the outcome so that they could support their hypothesis during the presentation.

The results of y=f(x) are different because this lesson uses different materials to input various conditions to unravel the equation. 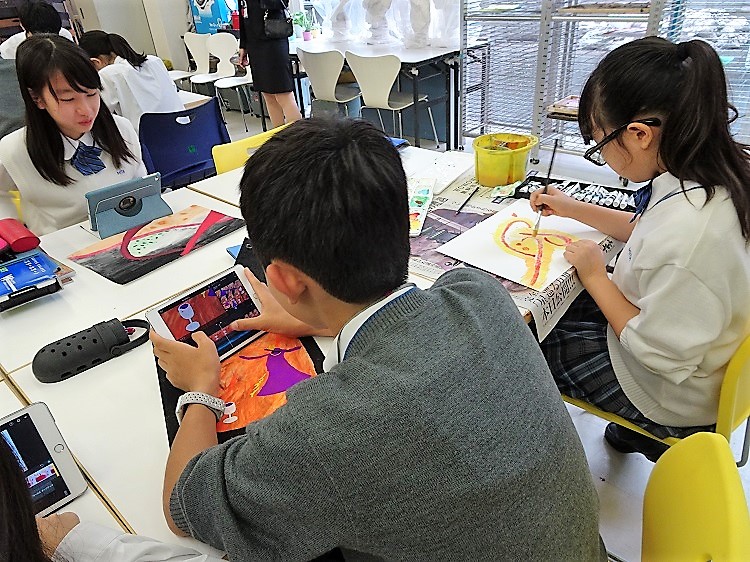 In the art lesson, you could see what kind of image was being expressed when you input certain music. However, it wasn’t finished yet. The app was used to capture the images, which were then combined with music and movements. This made you think about the emotions you feel and ideas you imagine when you hear the music. It made you wonder how moving images are expressed in movies. 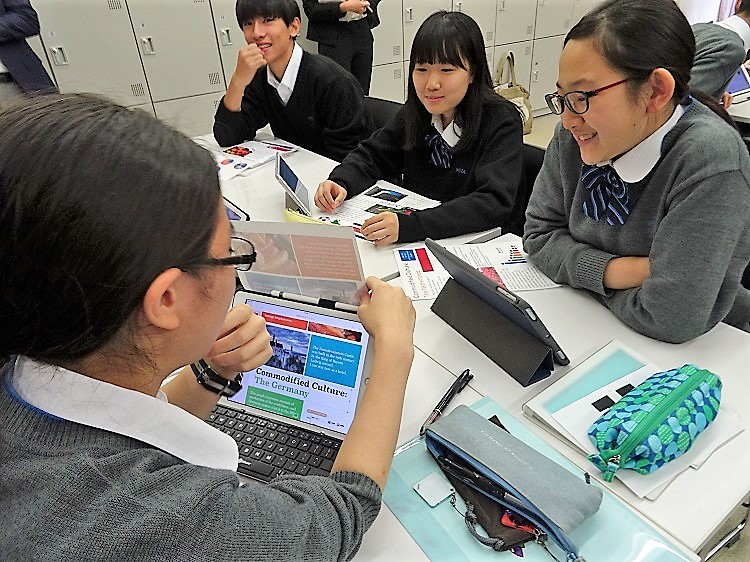 In the English lessons of the medical science technology (MST) class, the students worked in teams to research information about each country. They expressed their thoughts which they shared with each other during the discussions.

The reality is that, every class we asked, all reacted in a similar, agile way. What did this mean? You could start to see the reflection process in the e-portfolio through accessing iTunesU, whenever you like and wherever you are. The syllabus clearly states how you are learning, what you are learning and for what reason. 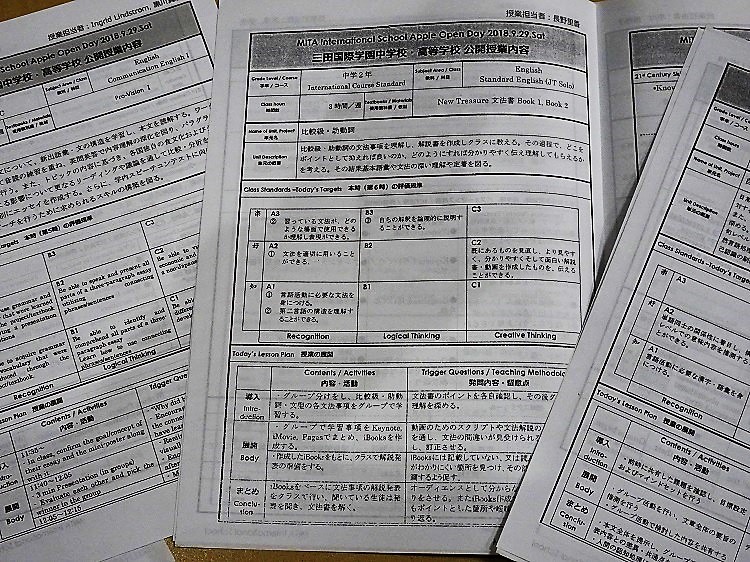 Mita International’s meta-rubric may be simple but because of this, specific rubrics are developed in various ways with the same structure for each unit of each subject. A system of diffusion and convergence has been created, which is shared between the teachers and the students. So, that is the trigger question (input) and the result is the output. So there is a lesson that reflects this exactly to help with the learning of the PBL of the process. In other words, the function y=f(x) is the lesson. 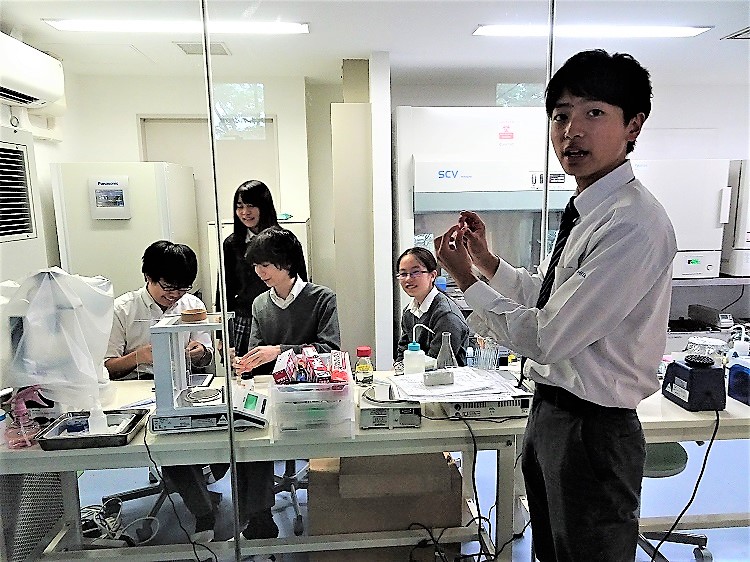 If you walked by the laboratory during break time, you could see the students in the MST class doing experiments. If you asked them what they were doing, they said they were experimenting to see whether they could find genes from places nearby, that could be useful for antibiotics in the future. To do this they analyzed the genetics of plants, which they collected from inside the school and from parks close to the school.

They politely explained the research method that they used in the genetics experiment but it was difficult to understand because it was too technical. The School Director, Kiyomichi Ohashi, had already informed us that the MST class is graded using the curriculum from the Advanced Placement (AP) program in America. From this, we understood that the students were experimenting at or above undergraduate level, which is truly amazing. 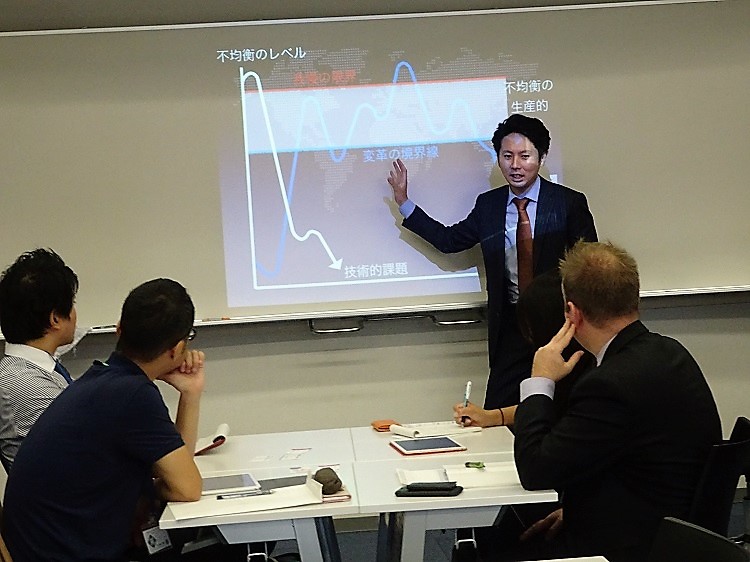 The last part of the Open Day was the subcommittee meeting. This was so that the teachers that participated could reflect on the lessons that they enjoyed the most. Within this meeting, Headteacher Jun Tanaka discussed with the participants about the definite possibility of all teachers and all students using iTunesU to create new lessons.

Under these circumstances, this School of Miracles is able to create lessons and a curriculum to create y=f(x). For this to happen, the theory of organizational management needs to be shared throughout the entire school and the actual method of sharing needs to be considered. It isn’t possible to only create x or to only create y because there isn’t a cultural capital of this new type of learning. Cultural capital is a term used in sociology that refers to the social assets an individual possesses, such as education, intellect, and style), which contribute to social mobility within the overall society. To become a culture, there needs to be the possibility of becoming sustainable.

It isn’t just about supporting each individual teacher’s strength. So, it is important to work in teams and share the learning so that it becomes a routine. There is still a rough road ahead of us and there is a chance that we will crash. It is as though there is a mountain that can’t be moved.
A number of participants gathered to discuss their ideas to ensure they do everything possible to make this a success. Following this discussion, Headteacher Tanaka thought of a new idea. This will be announced soon.
Tags:
三田国際
C1英語
PBL
ICT
GE3.0